Since the Nest Learning Thermostat launched in 2011, no other smart thermostat has emulated its core function — learning your schedule and adapting to it automatically, so you don’t have to lift a finger. This feature has made the Nest one of the best smart thermostats (lots of) money can buy for years. But just a decade on, Amazon has finally done it. The online shopping giant’s $60 Amazon Smart Thermostat can intelligently determine if you’re home, away, or sleeping and automatically adjust your climate to keep you comfortable and potentially save you money. And you don’t have to program anything.

Amazon worked with Resideo (owner of the historic thermostat brand Honeywell Home) to develop the thermostat, and its internals are very similar to the Honeywell Home T9 and T5 smart thermostats. It’s compatible with most 24 volt HVAC systems (you can check compatibility here), but doesn’t support systems with more than three stages or multi-speed fans. Together, Amazon and Resideo seem to have finally cracked the smart thermostat conundrum, and the Amazon Smart Thermostat’s learning feature — called Hunches — is very good. No, it isn’t quite as good as Nest’s, but it also doesn’t cost $250. So, tradeoffs. 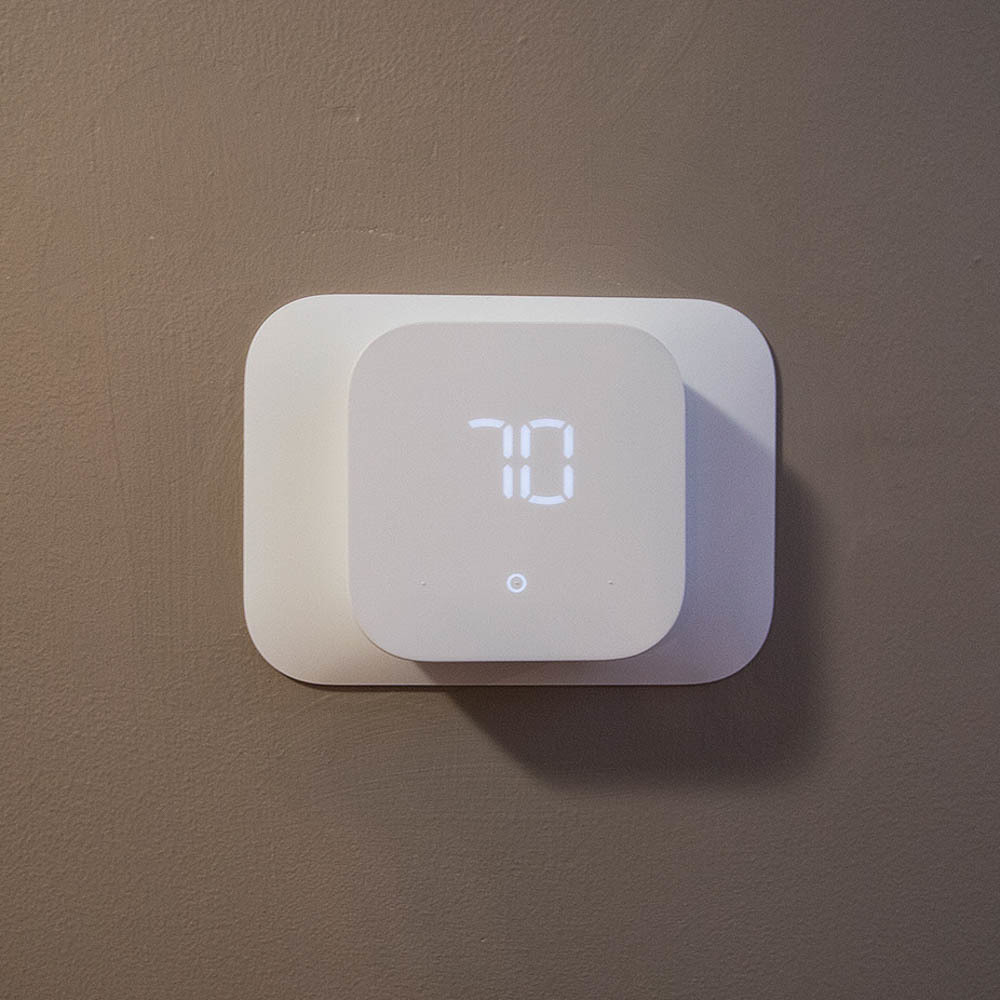 Hunches — which are part of Amazon’s broader Alexa smart home platform — are AI-driven decisions that use data from your Alexa smart home to decide what to do with your temperature. It follows, unsurprisingly, that the more Echo smart speakers and displays you have in your home, the better it will be. According to Amazon, Hunches also uses “select other smart home devices like lights, locks, and sensors” to determine if you are home or away, as well as geolocation of yours and your household members’ smartphones (everyone has to have the Alexa app installed and location settings turned on for the thermostat).

However, unlike with the similar Nest experience, you don’t have control over which devices make those decisions; you don’t even know which ones make the decisions. This led to some confusion in my testing, including that Alexa now thinks I get up at 4:31AM every morning, I assume because my daughter sat up in bed at that time and has an Echo Show as her bedside clock.

For the next three days, it turned on the heat a little too early, and I had to go into the thermostat settings in the app to tell Alexa its Hunch was wrong. After three times telling it that, no, we do not wake up at 4:31AM, it reverted to our regular wake-up time.

It’s hard to quibble much at this price, however, because at least it’s trying to be smart. Outside of Nest and Ecobee, few thermostats are actually smart. Most are just controlled remotely — either by an app, voice, or geolocation (where it adjusts based on whether your smartphone is at home). This is all very handy, but it’s not intelligent.

Case in point, the new Nest Thermostat has no advanced AI features of which to speak. While it can do useful energy-saving or comfort-increasing tasks such as preheat or cool the home or use the fan to circulate air to more efficiently use air conditioning, it doesn’t have the same learning features as the Nest Learning Thermostat and its smarts are largely reliant on Google’s home / away modes, which can use geofencing, on-board motion sensing, and other Nest smart home products to determine if someone is home. As with the Learning version, you can choose which devices feed into the home / away modes, which you can’t do with the Amazon Smart Thermostat.

If you don’t like the idea of Amazon controlling your climate willy-nilly, the Smart Thermostat has a standard scheduling option. With either set up, you can also use Alexa’s Routines to have your thermostat do specific things based on time of day, when a smart home device tells it to (such as a compatible temperature or motion sensor), or with your voice. These functions are available to any smart thermostat that works with Alexa, but you will not find one as inexpensive as this one.

The closest competitor price-wise — the Wyze Smart Thermostat — is $80, and the Honeywell Home T5 and T9, whose hardware the Amazon thermostat shares, start at $120. Most other smart thermostats are over $100, including the Emerson Sensi, the Lux Kono, and then Ecobee’s and Nest’s start at $180 and $130, respectively.

Of course, almost all those thermostats work with multiple platforms. The Amazon thermostat only works with Alexa. And while the coming smart home standard Matter — which promises interoperability between ecosystems — may change that, Amazon has not confirmed that this device will be upgraded to support Matter.

While this thermostat is inexpensive, it doesn’t look cheap, unlike the Wyze Smart Thermostat, which has a plasticky feel and an odd, oblong design. The simple, clean design of the Amazon Smart Thermostat will fit in with most homes, and because it doesn’t have an LCD screen, it doesn’t scream “high tech” like others in this space.

Instead, the all-white plastic body has a capacitive touch surface that illuminates LEDs to show you the touch points, system mode, and set temperature. There is also a small green tree that appears when you set the temperature to ones Amazon thinks are energy-saving — 68 degrees or below for heating and 75 degrees or above for cooling in my location. They say imitation is the sincerest form of flattery; I have to wonder how Nest and its iconic green leaf feels about this. At least Amazon didn’t copy Nest and make you pay an extra $15 for a faceplate to cover up any wall warts left after installation; you get one included (and a screwdriver!).

The simple, clean design of the Amazon Smart Thermostat will fit in with most homes

Despite the minimalist look, there are enough controls on the device for easy, everyday use — you can switch modes from heat, cool, fan, and auto, as well as adjust the temperature up and down and turn the system off. Only the bottom of the device is touch-capacitive, and there are three small markers to show where to touch.

Most of the setup and programming of the thermostat requires the Alexa app. And, as you’d expect from an Amazon device, it’s designed to be controlled with your voice. This makes it surprising that the Alexa voice assistant isn’t built in as it is in some of Ecobee’s models. Instead, you need to have a compatible Alexa device for voice control.

Integration with Alexa is straightforward and doesn’t require a skill or account linking. Setup and installation of the thermostat is similarly simple. You will want to check if your heating and / or cooling system is compatible first, however. And if you don’t have a C-wire, you will need to opt for the $75 version that comes with a C-wire adapter and plan for a much more involved installation. (C-wire is short for common wire and supplies power to your thermostat. Most connected thermostats need a C-wire to connect to Wi-Fi, which is a big power drain.)

Everything you need to install the thermostat comes in the box, including a screwdriver and handy labels for identifying the thermostat wires. The Alexa app guided me through installation very well, making it clear which wires should go where, connecting the thermostat to my Wi-Fi, and testing that everything was working correctly. If you are uncomfortable with wiring or aren’t familiar with how your heating and cooling system works, you should get professional help. Messing up your HVAC system will be a costly mistake.

Using the Alexa Smart Thermostat was a smooth experience. The Hunches worked well (other than my 4:30AM blip), turning my heating down between 11PM and 11:30PM every night and back on at 6AM in the morning. Switching to away when the house was empty during the day was less reliable, and in my week of testing, I wasn’t able to get a firm read on how long it takes to adjust to an empty home — this is a key component of any energy savings this device will get you, so I’ll update this review once I’ve had more time to evaluate the feature. However, you do have the option of telling Alexa, by saying “Alexa, I’m leaving” as you walk out the door.

Controlling the thermostat with voice using an Echo speaker or display was smooth — and with the latter, an interactive screen pops up for further control if needed. You can control the mode with voice, too, switching to heating or cooling, and even ask Alexa to change the temperature when no one is home.

But the app was a more frustrating experience. It takes four or five taps to get into the thermostat screen, although eventually I was able to add the thermostat to the new Favorites section in Alexa’s devices page, which speeds things up a tad. Once on the correct screen, the controls mimic those of the physical device, plus there’s a humidity reading (the thermostat has a humidity sensor in it, a temperature sensor, and an ambient light sensor for adjusting the brightness of the LEDs).

The one other area I ran into issues with was using the thermostat in a two-zoned home. As with all thermostats, you need one for each zone in a multi-zoned system and they control the climate independently. But the Alexa app wouldn’t let me set the home, away, and sleep temperatures separately; whatever I set for my upstairs zone also applied to my downstairs zone. That’s not ideal if you like to sleep at 66 degrees but want your living room and kitchen to drop to 62 at night to save energy.

Switching the upstairs thermostat to a schedule and keeping the downstairs on Hunches did allow me to have different set points, but that’s not an ideal solution. This is a problem in the Alexa software, as with every other thermostat I have tested in this two-zone system, each thermostat controls each zone entirely independently.

The Nest Learning Thermostat, the Ecobee thermostats, and the Honeywell Home T9 Thermostat all work very well with their own external sensors, but these thermostats cost $100 to $150 more than Amazon’s. You also don’t get useful extra features such as the time and weather displayed on this cheaper thermostat or integration with platforms or voice assistants other than Alexa. Still, if those features aren’t important to you, then you really can’t go wrong with this device.

It’s hard to not be impressed with this thermostat

Based on my testing, it’s hard not to be impressed with the Amazon Smart Thermostat, and not just because it’s cheap. I have tested almost every smart thermostat released since the Nest Learning Thermostat launched a decade ago, and this is easily one of the best.

Update, Friday, November 19th 4:45 pm: Added details on HVAC systems the thermostat is not compatible with.

We share everything about Digital Business, Digital Economy to make Vietnam Business Better. The blog is running by Human - Robot.

about 1 month ago Deploy AI Apps with Intel® OpenVINO™ and Red Hat How can you successfully deploy AI apps and start improving your business? Listen to this podcast to learn about the full AI app lifecycle and how tools like OpenVINO™ can simplify the process. Listen Now

No Result
View All Result